The Bank reserves the right to accept or reject the bid either partially or fully as found appropriate. 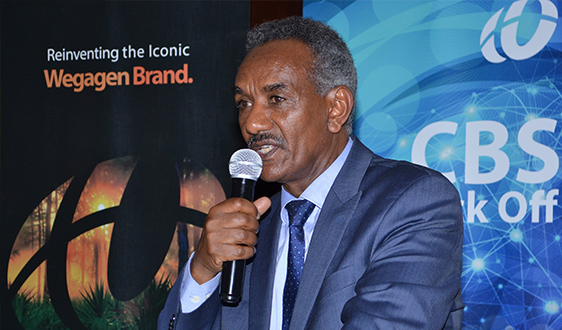 Wegagen Bank has introduced a new core banking system called Oracle Flex Cube which is aimed at significantly transforming its operational performance and customer service delivery to the highest level of efficiency.

This core banking system has been successfully implemented in all the 285 Branches and forex bureaus of the Bank since January 1, 2018. In an event organized to celebrate the successful implementation of the core banking system on January 16, 2018 Bank President Ato Araya G/Egziabher said that the new Core Banking system would bring about a dramatic improvement in the operational performance and service delivery efficiency of the Bank. He also called on all districts to utilize the full capacity of the technology and raise the performance and standard of service delivery in the Bank.

Wegagen Bank’s CIO and Project Leader Ato Alexander G/Egziabher said that the new Oracle Core Banking System project was completed within the schedule and budget which is quite a remarkable accomplishment in the Banking industry in the country so far, given the scope and the complex nature of the project.

He said that the data migration from the previous Core Banking to the latest version of 12.1 Oracle Flex Cube Core Banking System was conducted in 260 Branches and forex bureaus in a space of two days with unmatched effectiveness that has not also been experienced in the industry so far. The CIO lauded the extraordinary commitment of the project team members who were working late hours including on Sundays and holidays to finalize the project timely.

At every milestone of the project, the Bank has given recognition to the tireless effort of the team members which made the project a success. The project has involved around 50 full time and 30 on call basis Bank staff drawn from the IT and Operational units of the Bank.

During the Bank’s annual Forex Day held at Capital Hotel and Spa on November 2, 2017 Board Chairman Teferi Zewdu said that the Bank has earned 425.5 million USD in the last fiscal year ended on June 30,2017.

The foreign currency earning of the Bank showed 60.3 percent increase from that of 2015/16 fiscal year amounting to 160 million USD, the Chairman said.

The Board Chairman expressed the Bank’s readiness to give a better service to customers and partners engaged in foreign currency generation with a view to increasing foreign currency inflow to the country.

On the occasion Ato Teferi and CEO Ato Araya Gebre Egziabher handed over accolades and certificates of recognition to prominent customers who generated large amount of foreign currency in the last fiscal year ended on June 30, 2017.

Wegagen Bank declared that it earned a gross profit of Birr 708.1 million in the 2016/17 Fiscal Year ended June 30, 2017.
The Bank has officially announced this achievement in the audited annual report presented at the 24th Ordinary Shareholders’ meeting held at Hilton Addis Ababa on November 16, 2017.
Bank President Araya G/Egziabher on the occasion said that the Bank earned a net profit of Birr 532.1 million in 2016/17 Fiscal Year after paying a profit tax of over 175.9 million.