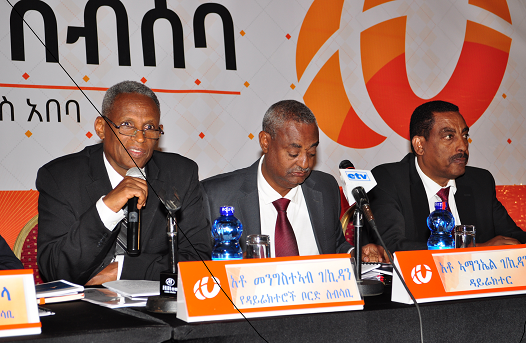 Addis Ababa, November 15, 2018- Wegagen Bank announced a gross profit of Birr 1 billion 50 million in the 2017/18 Fiscal Year ended June 30, 2018, showing a 49% increase over the previous year’s profit of 705 million. The Bank’s profit has seen a continuously rising trend over the past three years. The significant increase in the profit is attributed largely to the significant increase in the total income, which stood at 2.34 billion, a 39.6% increase over the previous fiscal year. This development puts Wegagen in the category of the few private Banks that managed to gross a billion birr profit.

The Bank has officially announced its achievements in the audited annual report presented at the 25th Ordinary and 13th Extraordinary Shareholders’ Meeting held at Hilton Addis Ababa on November 15, 2018.

The CEO also indicated that the Bank has carried out several projects aimed at modernizing its infrastructure in a bid to provide better services to its customers. The most notable of such projects carried out in the 2017/18 Fiscal Year was the replacement of  its core banking system with Oracle Flex Cube which has significantly transformed its operational performance and customer service delivery to the highest level of efficiency. It is also undertaking a project to build a new state of the art data center in its newly inaugurated Headquarters building on Ras Mekonnen Street. Wegagen’s new IT infrastructure has enabled it to provide innovative & value adding financial services, including the newly introduced air travel payment services in collaboration with Ethiopian Airlines.

Wegagen Bank, as part its corporate social responsibility, has extended its support, in the amount of Birr 23 million, to the effort in the rehabilitation of people internally displaced due to conflicts in various parts of the country. It also donated Birr 2 million to support the fight against engulfment of Lake Tana with Water Hyacinth weed also known as “Emboch Arem.”